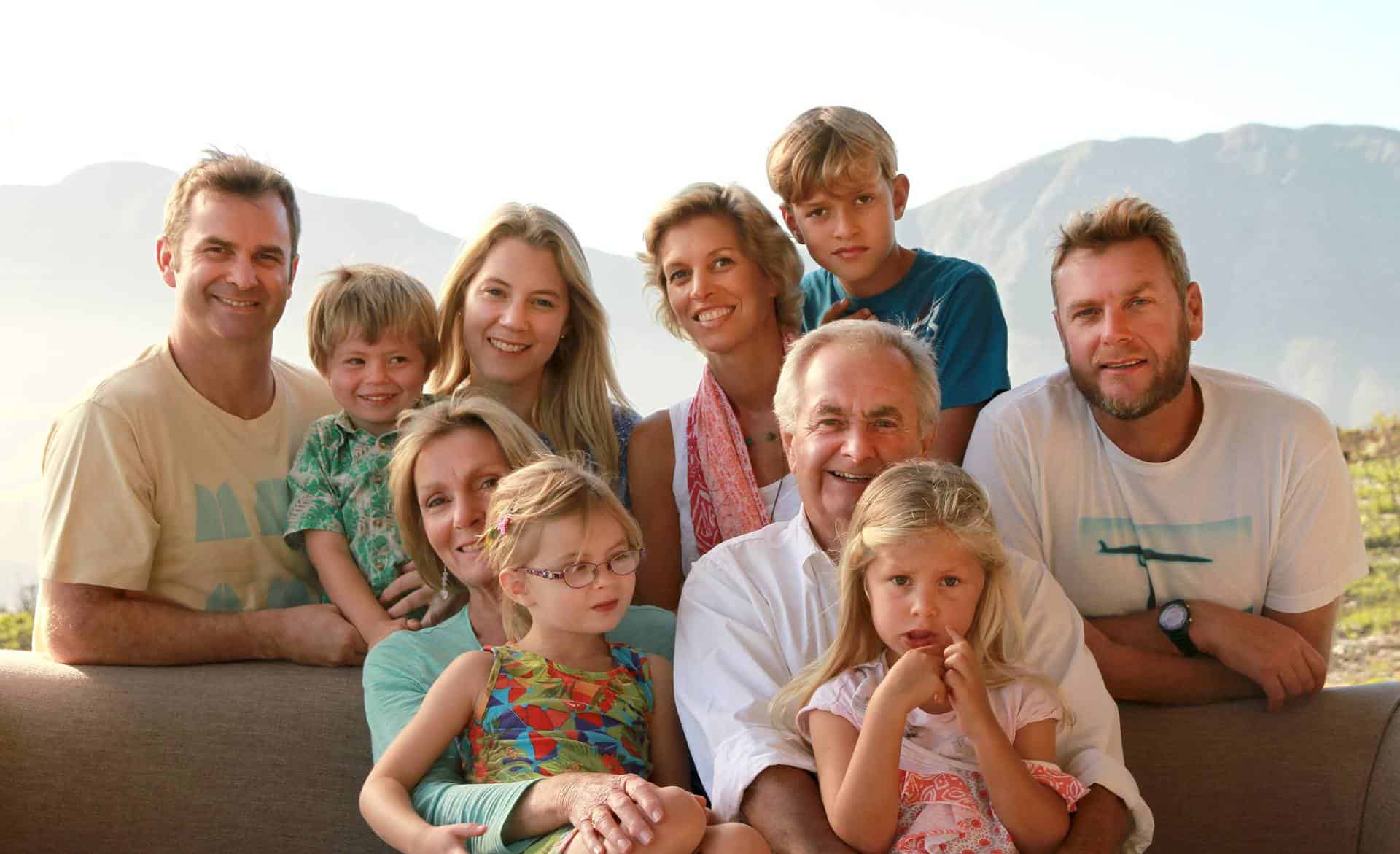 Newton Johnson vineyards is a small family owned winery located in the Upper Hemel &Aarde Valley near the coastal town of Hermanus on the Cape South Coast.
Newton Johnson Vineyards is owned and managed by the Newton Johnson family. We are based near the seaside town of Hermanus, an hour and a half’s drive out of Cape Town. This is a popular tourist destination, famous for some of the most spectacular land-based whale watching in the world and also known for its bracing champagne air, lush indigenous fynbos (literally fine bush, a plant kingdom exclusive to the Cape), mountain walks and bike trails.
Dave, a Cape Wine Master, has over 30 years experience in the South African wine industry. He is ably assisted by his equally wine- and food-focused wife, Felicity (nee Newton). Then there are the two brothers, Bevan and Gordon who are both dedicated to the family concern. Gordon is the winemaker and crafts the wines to translate the message of the soils into the wine. He is assisted by his newly-wed wife, Nadia who is very actively involved in the winemaking as well as the logistics of the company.
Bevan is the managing director and in charge of the marketing. His creative wife Ezanne is a freelance graphic artist with experience in the wine industry, and she adds flair to the promotional material (like this website). Come harvest time, you’ll find our whole family working together in the cellar.
Dave and Felicity (néeNewton) Johnson entered in to the wine industry in the 70’s in an exciting era where a generation of winemakers were creating the foundations for premium wine making in South Africa and exploring the concepts of vineyard origin and estate made wines. Dave went on to become one of the country’s first Cape Wine Masters and in the early 90’s, with South Africa’s readmission in to international markets, was instrumental in exposing and exporting some of these estate wines in to mainstream wine markets, such as the United Kingdom. He began his own negociant wine brand called Cape Bay which, after some rapid growth, soon required a home and cellar of its own. This initiated their move near to the seaside town of Hermanus and into the picturesque Hemel-en-Aarde (Heaven and Earth) Valley with its views over the Atlantic Ocean. It was here in 1997, joined by their two sons Bevan and Gordon that they started to make their first Newton Johnson wines.
Newton Johnson Vineyards is situated in the Wine of Origin ward of the Upper Hemel-en-Aarde Valley, which is located approximately 135 kilometres from Cape Town on the Southeast Cape coast. The appellation has already established itself as one of the premier viticultural sites in the Cape, traditionally specialising in Pinot noir and Chardonnay. Recently, it has further discovered an affinity for Syrah and Sauvignon Blanc. In South African terms it is seen as one of the coolest vineyard sites, with the ability to create wines of finesse, minerality and complexity.
Ranging in their proximity to the ocean from 2 km to 8 km, every vineyard in the Valley has the distinct feature of being able to see the sea. The climate is temperate. Parallel mountain ranges channel the southerly maritime winds through the appellation in the summer. These winds in turn bring regular sea mists and overcast conditions to the valley and with it remarkably even temperatures. The average mean temperature is 19.8 C, the annual rainfall 750mm, with the altitude of the various vineyards between 100 and 300m.
There are two properties belonging to the domaine, Newton Johnson Vineyards (north-facing) and Sandford (south facing), with 18 Ha of vineyard planted and 140 Ha in total. Our farming practices are sustainable and environmentally friendly, that inevitably leads to better wine in the bottle. Our vineyards are 100% free of any leafroll virus, having used natural agents such as ladybird and wasp insects over the years to keep our vineyards healthy. We also utilise high density plantings and some alternative vine training methods, such as guyot (cane pruned) and echalas (stake trained) vines, striving for more balance in the growth of the vineyards and better flavour representation. Our soils, here in the upper part of the valley, are variable concentrations and depths of decomposed granite, fine fragments of quartz, and clay. The diversity produces a variety of characters, from fine and perfumed to more structured wines.
Our contemporary-styled winery is situated above the vineyards and built against the mountain slope in order to create four levels in which to facilitate grape processing via gravity. After 10 years of making wines in the valley, this new cellar was ready just in time for the 2006 harvest, to realise our winemaking dreams with some imaginative engineering. We accommodate 250 tons of grapes during the harvest, which is all produced, bottled and stored on the domaine.
When visiting the winery one may also get to see the cellar in action during the harvest with glass wall and window views from different angles. Looking outside visitors are also treated to some of the most breathtaking sea- and landscape views in the Cape winelands from the tasting room and the restaurant